Personal assistants such as Alexa, Siri, or Cortana are widely deployed these days. Such Automatic Speech Recognition (ASR) systems can translate and even recognize spoken language and provide a written transcript of the spoken language. Recent advances in the fields of deep learning and big data analysis supported significant progress for ASR systems and have become almost as good at it as human listeners.
In this work, we demonstrate how an adversary can attack speech recognition systems by generating an audio file that is recognized as a specific audio content by a human listener, but as a certain, possibly totally different, text by an ASR system:

More audio examples can be found at the end of the articel.
These so-called adversarial examples exploit the fact that ASR systems based on machine learning have some wiggle room that an attacker can exploit: by adding some distortions, we can mislead the algorithm into recognizing a different sentence. The main contribution of our work is to demonstrate that we can generate the noise in such a way that it is almost completely hidden from human listeners. For this purpose, we take advantage of a psychoacoustic model of human hearing, describing the masking effects of human perception, which is also used for MP3 decoding. 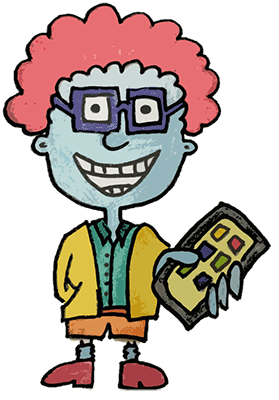 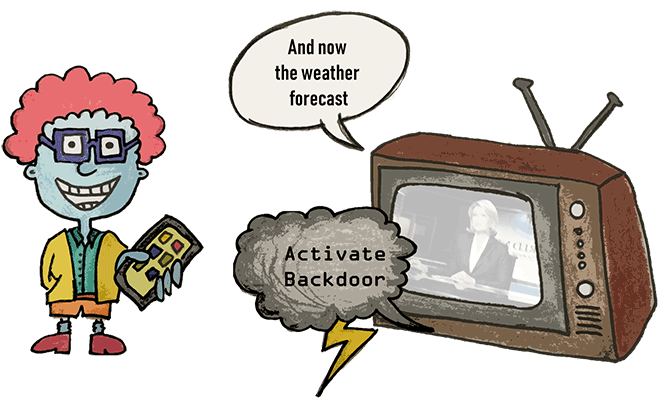 Why (and how) can we attack ASR systems?

In the following, you will find a short overview of the attack and its most important characteristics. If needed, you can find more background on ASR systems, psychoacoustics, or the actual implementation in our technical paper, which provides a detailed documentation of our attack.


Automatic Speech Recognition (ASR) systems can recognize speech, recently, almost as well as human listeners. We find ASR systems in a variety of modern systems, for example, home automation systems or personal assistants in smartphones. Using different methodologies and technologies from the field of computational linguistics, ASR systems can recognize and even translate spoken languages. Advances in the fields of deep learning and big data have supported recent progress for ASR systems, however, they have also created new vulnerabilities. We can attack speech recognition systems by triggering their actions through imitated voice commands. In this work, we implement an attack that activates ASR systems without being recognized by humans.
We used Kaldi as state-of-the-art ASR system, which consists of three different steps to calculate transcriptions of raw audio:

Psychoacoustic hearing thresholds describe masking effects in human acoustic perception. Probably the best-known example for this is MP3 compression, where the compression algorithm uses a set of computed hearing thresholds to find out which parts of the input signal are imperceptible for human listeners. By removing those parts, the audio signal can be transformed into a smaller but lossy representation, which requires less disk space and less bandwidth to store or transmit. 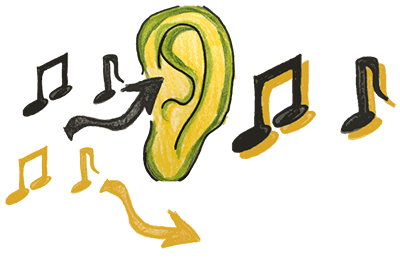 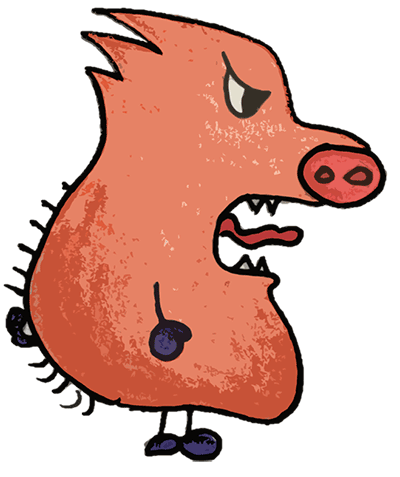 How to exploit this

MP3 compression depends on an empirical set of hearing thresholds that define how dependencies between certain frequencies can mask, i.e., make imperceptible, other parts of an audio signal. We utilize this psychoacoustic model for our manipulations, i.e., all changes are hidden in the inperceptible parts of the audio signal.. 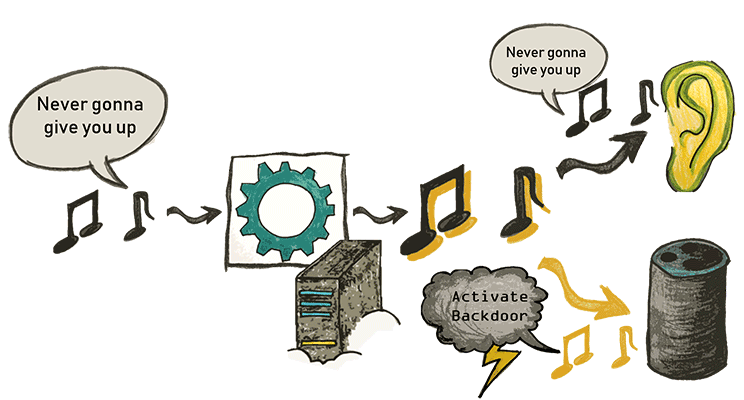 In general it is possible to hide any transcription in any audio file with a success rate of nearly 100 %.
As an example, we have some audio clips, which are modified with the described algorithm:

The Code is available on GitHub.

The paper is accepted for NDSS 2019.
Read the paper

If you want to cite the paper, please use the following BibTeX entry:

Can this happen to me?

The presented attack is currently not optimized for over the air attacks. Also it is not tailored for an existing commercial product such as Alexa, Siri, or Cortana, but for the open source Kaldi speech recognition system. However, we think that such an attack, in general, is possible and in future studies, we want to show that the attack also works when the signal is played via a loudspeaker.

What can be done to prevent such an attack?

During the development of a speech recognition, especially during the training of the neural network, developers need to consider the possibility of such attacks and adapt the training to not misrecognize adversarial inputs.

What can be possible attack scenarios?

Voice assistants are often equipped with an online shopping feature or even connected to an entire smart home system. Therefore, a possible attack might target online shopping without the knowledge of the owner or may control smart home devices, such as security cameras.

Can we finally get some merch?

Definitely! Yes! We started to print shirts and underwear, as these were highly requested items in prior projects. In the near future, there will also be attacker-icon piercings for generic parts of your body, a series of smart casual apparel, and multi-functional can openers. Please be aware that we support fair trade production facilities and must charge an extra political-correctness fee of 23 % of the original item price. Let's create a better world, together!